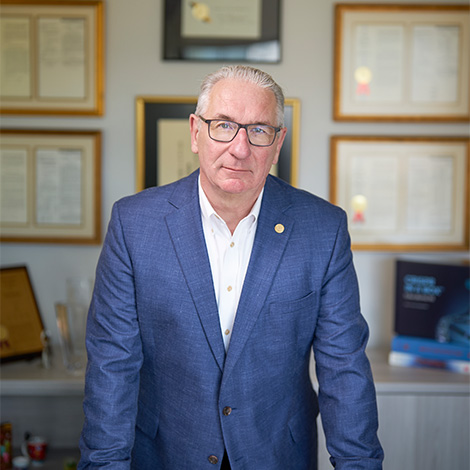 Eric B. Kmiec, Ph.D., is the Executive Director and Chief Scientific Officer of the Gene Editing Institute (GEI) at the Helen F. Graham Cancer Center & Research Institute at ChristianaCare. The Gene Editing Institute has recently been endowed by the Ammon Foundation. His research centers on understanding the process of gene repair and gene editing with a focus on CRISPR-directed genome engineering in human cells. He is widely recognized for his pioneering work in the fields of molecular medicine and gene editing having discovered many of the molecular activities that regulate the efficiency of human gene editing. Throughout his professional career, Dr. Kmiec has led research teams in developing gene editing technologies and genetic therapies for inherited disorders such as Sickle Cell Disease and Criglar-Najar Disease. The Institute is now heavily focused on developing CRISPR-based gene editing approaches for solid tumors with squamous cell carcinoma of the lung and esophageal cancer as the initial targets. These clinical programs are now advancing through the FDA approval process.

Dr. Kmiec received his BA in Microbiology from Rutgers University, MS in Cell Biology from Southern Illinois University and his Ph.D. in Molecular Biology and Microbiology from the University of Florida School of Medicine. His Post-doctoral training was done at University of Rochester. Dr. Kmiec holds faculty appointments at the University of Delaware and the Wistar Institute. He has also held faculty appointments at Thomas Jefferson University, University of California at Davis, and Georgetown University School of Medicine. Dr. Kmiec has served as the Principal Investigator for research projects supported by the National Institute of Health (R01, COBRE and R21 grants), the National Science Foundation, the NIST-BIRD Foundation, the March of Dimes, the State of Delaware, and the American Cancer Society for over 35 years. He serves on numerous editorial boards, has authored 165 peer-reviewed publications as primary or senior author, numerous reviews and has edited several books and journals in gene therapy.

Dr. Kmiec has been the primary thesis mentor for 18 Ph.D. students, 4 MS students and numerous postdoctoral fellows and residents. He has held or holds major administrative posts on various NIH regional and State biomedical research grants, including IDeA Network of Biomedical Research (INBRE) and Centers of Biomedical Research Excellence (COBRE) as well as NIH study sections. Dr. Kmiec was also honored as the Eminent Scholar in residence at Marshall University (Huntington, West Virginia) in 2009-2011 and was elected as an Honorary Medical Commander of the 436th Air Wing at Dover Air Force Base in Dover, Delaware for in 2013 and again in 2014. Dr. Kmiec has 15 issued patents, has founded two biotechnology companies and has received numerous service medals and awards, including the Genome Canada Lectureship, the Proudford Research Award in Sickle Cell Disease, multiple Delaware Bio Science Innovation Awards, and the Philadelphia- Israeli Chamber of Commerce Life Science Innovator Award.